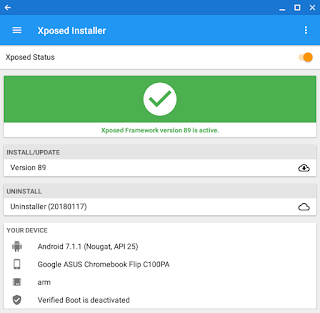 *It seems not to be easily possible currently to install Xposed via the installer app on CrOS version 65 at present, due to a (temporary) issue mounting the Android rootfs as writeable at runtime. Installing files (manually, or via a script) into the container image while it is mounted elsewhere does still work. The writeable mount issue is also present on v66 but can be fixed by editing the container config.json (deleting the string "dev", from the "rootfs/root" section under "mounts".
Posted by Nolirium at 09:30